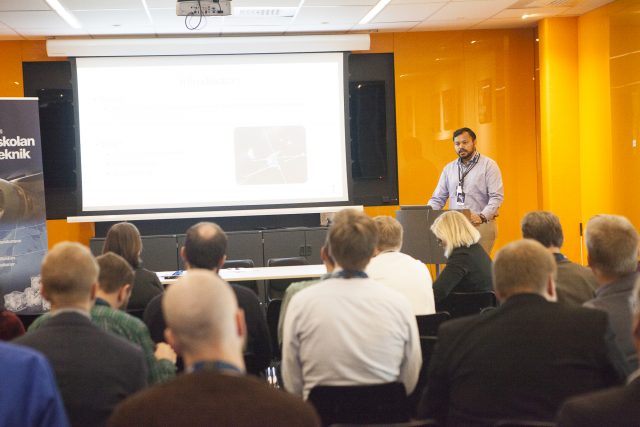 Onboard Space Systems at Luleå University of Technology, the research group of professor Reza Emami, is working in the field of Multi-spacecraft formation flying with an aim of advancing of the real world applicability of the spacecraft formation.

–  One of the group’s active research areas is development of new strategies and control algorithms for formation flying and operation of multiple spacecraft in various missions, from station keeping of geostationary satellites to future space explorations. We strive for creating advanced techniques that can control multiple (small) spacecraft in close harmony, spatially and temporally, bringing about the notion of fractionated spacecraft. Working with industry is crucial for such ambitious endeavors as a constant reality check for our work, said Professor Reza Emami.

The Ph.D. student Sumeet Satpute, from Onboard Space Systems at Luleå University of Technology, has worked for three years on the project of Multi-spacecraft formation control in cooperation with the space company OHB-Sweden.

– My main research question is how to develop the capability of spacecraft formation concerning its reliability in terms of mission accomplishment, robustness in terms of partial or complete hardware failure and adaptability in terms of resource allocation or mission needs. Closely associated to the topic of multi-spacecraft formation flying is the co-location of multiple geostationary satellites, where multiple satellites share same longitudinal position. For this part my research question is how to design maneuvering plans autonomously for a fleet of satellites in a geostationary slot.

– Today there is an increasing problem of limited geostationary slots and allocation-space for satellites. Together with OHB Sweden we’ve been trying to find ways to use this space more efficiently by maintaining multiple satellites in the same slot with autonomous maneuver planning techniques.

One solution is to place multiple satellites in one slot for station keeping tasks. This has been done since the 1990’s. However, because the physical space has shrunk and also due to the use of new more efficient electric propulsion systems, the frequency of commands sent to maintain the satellite’s position has increased, which in turn increases the workload for the satellite operator. This is why OHB Sweden wants to develop autonomous maneuver planning techniques for their new Electra platform, a small all electric telecommunication satellite platform that OHB Sweden is in the process of building.

Why is this particular project interesting for OHB?

– The research project has allowed OHB Sweden to gain further knowledge within the area of multi-satellite formation and autonomous collocation of telecom satellites. Both these areas lie within the core competence areas of the company, and the participation in a research project like this is important in order to stay competitive and to further augment these areas of expertise, says Per Bodin, head of AOCS department at OHB Sweden

Already some progress have been made in the cooperation.

– Following this topic, we have recently published an article with an algorithm that can maintain nine geostationary satellites, says Sumeet Satpute, Ph.D. Student at Luleå university of technology.