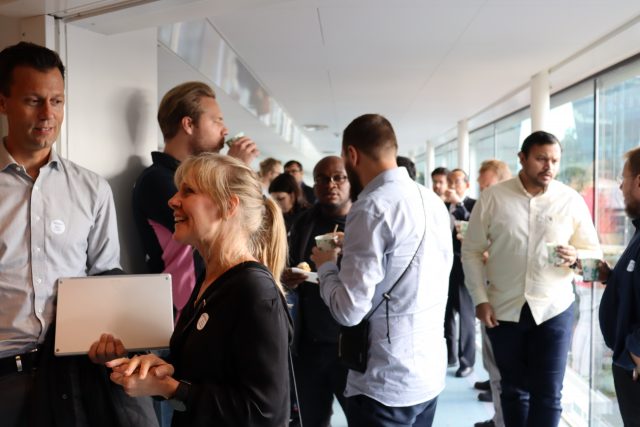 Nearly 100 representatives from the business, academic and public sectors met in Kiruna last week for two days of lectures and networking at Space Innovation Forum. The theme was testbeds for space and the massive potential for northern Sweden to claim a position as an international hub in this rapidly growing market.

The event programme covered a wide range of topics on the theme – from concrete cases to attracting investment, marketing and business strategy successfactors specifically for testbeds.

– My biggest take-away from the Space Innovation Forum is the test capabilities here in northern Sweden, across so many industries and sectors. There is great potential to collaborate and exchange ideas on marketing, business models, funding and much more, said Ann-Christin Uusitalo Eriksson from RiSE Research Institutes of Sweden.

Oscar Linde, GKN Aerospace also highlighted the growth of the space economy in northern Sweden and the importance of creating a platform for students and industry to network:

– The focus on test beds really made me open my eyes to all the capabilities and the engagement about space in northern Sweden and I must say that the development of Esrange is extremely exciting to follow. From mine and GKN´s point of view it was nice to meet our recently started PhD student within the RIT2021 project and I also enjoyed the chance the be a mentor for a student. Good initiative!

Space students at Luleå University of Technology are especially encouraged to join the event and get engaged in the space community. This event saw the launch of a mini-mentorship concept where students where matched with a volunteering mentor from members of the industry or academia communities. Also, the new student concept Space Innovation Summer was revealed, with presentations from the first three student teams who participated in the programme iniated by LTU Business in order to drive innovation.

– It’s fantastic to see so many people here – from university students and professors, to established industry players, local and national government agencies, start-ups and local companies. It’s a great receipt not only that there is a growing movement on the space scene in northern Sweden, but also that there is a real need for events like Space Innovation Forum that facilitate networking and partnership, says Johanna Bergström-Roos at LTU Business, project manager for RIT2021 and Space Innovation Forum.

”We are going to see a boom in testbeds”

Olle Norberg, the vice Rector of Space Technology at Luleå University of Technology  and RIT2021 project team member, explains why testbeds have a broad appeal and how they fit into the new space economy.

– Many new actors, faster development cycles, iterative development are transforming the space community as we know it and we are going to see a boom in space testbeds. With our existing space test infrastructure and established relationships with potential commercial partners, northern Sweden is in a good position to capture this opportunity to generate regional growth. One of our goals in RIT2021 is to strengthen the testbeds in northern Sweden.

Space Innovation Forum is a bi-annual event initiated and arranged by the project partners in RIT2021. Each event has a new theme, always designed with the aim to facilitate new relationships between regional firms, space industry, academia and public sector.

Testbeds are platforms and environments for experimental testing for research and product development. Testbeds are key for developing strong innovation processes across industries including aerospace, car manufacturing, health, mining and sustainability.

New Space (Economy) is a term used in the space community to describe the shift from an industry which was heavily dependent on government agencies to a more agile and private sector. The new space economy is driven by innovation and faster, better and cheaper access to space and data from space – with new products, services and users from outside the traditional space industry as a result.