Life on Mars sought in India 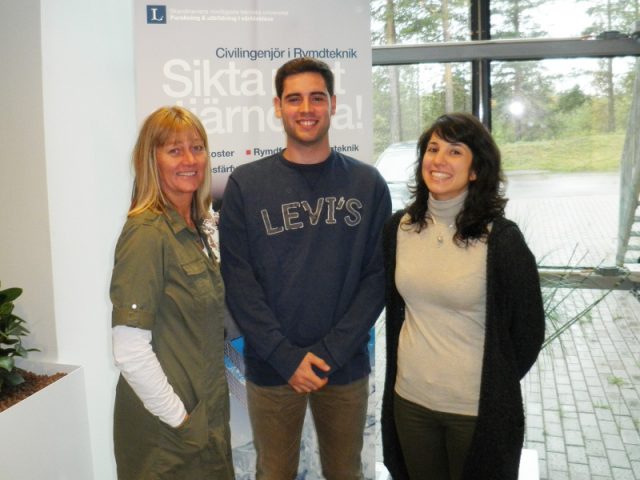 Johanna Bergström-Roos, project manager RIT, and the PhD students in Atmospheric Science Álvaro Soria Salina and Teresa Mendaza de Cal, are now leaving Kiruna for India. On the trip, they'll bring a prototype of HABIT, the instrument that will be sent to Mars in 2020..

Three members of the research group in Atmospheric Science are now leaving for Ladakh, India, to test a prototype of HABIT, the instrument selected as part of the payload on board the ExoMars 2020 mission.
– We look forward to seeing how HABIT performs under extreme atmospheric conditions, says PhD student Teresa Mendaza de Cal.

– HABIT will demonstrate in situ the possibility of having salty-liquid water on the Martian surface. This will be essential for future manned missions for Mars exploration.

The participants from Luleå University of Technology, PhD students Álvaro Soria Salina and Teresa Mendaza de Cal, and Johanna Bergström-Roos, project leader RIT, have already been in both Abisko and Iceland to get prepared for the expedition. Now it’s time for India and the prestigious expedition Spaceward Bound India, arranged by NASA. The final destination is Ladakh in the north of India, where the environmental conditions include high altitude (3,500-5,500 m), extreme dryness, cold, and high UV exposure and topological similarities with Mars. All these features are of high-interest from an astrobiology point of view.

– This trip will also help us to create necessary networks that is needed to strengthen the space area in the region, said Johanna Bergström-Roos, project manager for RIT.

During the 12 day long expedition, multiple different geografical zones will be visited. In addition to testing HABIT, the expeditioners will take samples from the soil, ice, water, permafrost and aerosols, to establish the amount and diversity of life they sustain through further chemical and biological analysis, contributing this way to the astrobiological studies that guide the expedition. The results will provide a valuable framework to define habitability criteria in relation to the rest of the environmental parameters measured, like it is expected to be done on Mars. Teresa Mendaza de Cal summarizes the scientific mission:

– We will test a prototype of HABIT to see how it performs under extreme atmospheric conditions. We will also characterize that response and check which are the environmental conditions producing it. Will we find life with the means we will have on site and if so, what kind of life?

Besides the scientific tasks, the team from Luleå University of Technology are also facing some logistic hardships in India. The high altitude locations mean lower density of air and lack of oxygen. They will have to trek along harsh, uneven terrains every day and at the same time handle the scientific equipment. They will have to master the assembly and dismantling of the HABIT prototype and the meteorological station, since it has to be installed in different points throughout the campaign. Also, the collection of the samples needs to be done carefully. If biologically contaminated, the samples will be useless.

Hopefully, Spaceward Bound India will be a successful and significant stop on HABIT’s way to Mars. And also a way of contributing to better life on Earth.

– We will test and evaluate the first prototype of an instrument that will give us more knowledge on how we can capture water from extremely dry environments. One day this new knowledge might help us to transform a desert area on Earth into a green oasis, and that would be fantastic. Water is one of the key components for life on earth and therefore an important issue for survival, says Johanna Bergström-Roos.

The HABIT instrument has 3 main capabilities: it will monitor the formation of brines on Mars and the conditions in which it takes place, it is an environmental station, and it is and in-situ resource utilization demonstrator to produce liquid water on Mars. The instrument is composed of two units, BOTTLE and ENVACK.

A container of salts divided into six different vessels in which the deliquescence process will be monitored as it occurs, providing a first in situ direct observation of liquid water. It includes hygroscopic salts whose presence in the Martian regolith has been reported so far, such as magnesium, sodium and calcium perchlorates, as well as sodium chloride. The hydration state will be registered by three conductivity sensors arranged at three different heights in each vessel, since the electrical conductivity through the salts depends on the amount of water they have captured. This way, the device will allow knowing in every moment if the salts are dry or hydrated and how much water they contain.