New forum focused on growth and innovation in the space sector 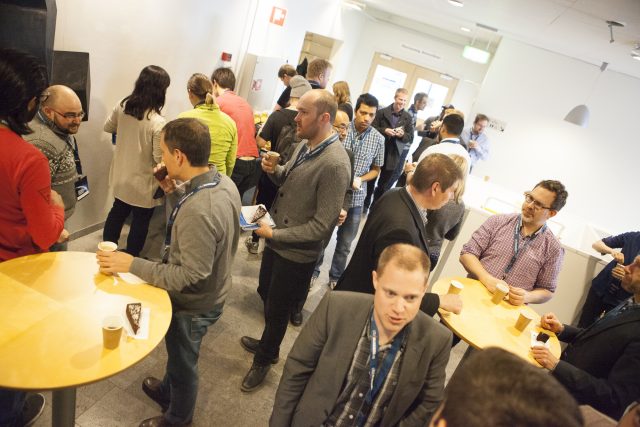 During two days the Space Forum Innovation has gathered Space Industry, regional SME:s alongside with the Academia in order to discuss how to create a stronger space industry. Discussion focused on new innovative ideas and open collaboration.

The Space Innovation forum, arranged by the RIT-project, had Stefan Sydberg, deputy mayor of Kiruna, as the opening speaker. He announced that Kiruna is setting a new focus on creating an innovative growth region by setting new goals to increase the number of full year students in the city to a total of 400 as well as creating a 1000 new jobs not dependent on the mining industry til 2020.

– In order to make this happen we will have to collaborate with the university in a much bigger degree. The space industry is a core business for Kiruna and the surrounding region, said Stefan Sydberg, deputy mayor.

Afterwards Professor Reza Emami spoke of the importance to collaborate between the three core space organizations in Kiruna, Esrange SSC, IRF and Luleå University of Technology in order to create a unique opportunity with a full service platform around small size space platforms.

– This full cycle platform is only available in Kiruna nowhere else in the world can it be found. We have three organizations that are specialists in unique areas such as platform design, development, system validation and verification at LTU, payload ground systems at IRF and Launch operations at Esrange. If we collaborate and put all platforms under one roof we will become the only place in the world that can offer this service, said Reza Emami, chaired professor of Onboard Space Systems at Luleå University of Technology.

A number of speakers followed on the topic with talks on Formation Flying in Space, Autonomous Navigation Systems for High Altitude Balloons, Software Defined Radio for Groundbased Satellite Communication and well as Micro propulsion in satellites and the possibilities available for future innovations in the field.

The next part consisted of the detailed briefing on the development of the HABIT instrument, selected for ESA:s Exomars2020 misson. The instrument is developed at Luleå University of Technology in cooperation with OmniSys instruments.

– We see the HABIT instrument as one of the first steps to colonizing mars, concluded Álvaro Soria-Salinas in the end.

The final segment focused on additive manufacturing as a new way to revolutionize the way you prototype and produce industry components where the two PhD students Christo Dordlofva and Angelica Lindwall disclosed their findings from a national journey in the Swedish industry.

– Additive manufacturing is a really hot topic in the space industry, however Sweden is not the industry leader and lies quite far behind leading countries in Europe, said Christo Dordlofva, PhD student at Luleå University of Technology.

Industry trends and needs in focus during day two

During day two the industry talked about their open innovation environment and the needs and ideas from the industry.

LTU-alumni Aleix Megías, listed by Forbes as industry change leader at 30 under 30 in Europe, talked about his company OpenCosmos and their journey from an idea to a startup and their work together with Professor Reza Emami on the Cubesat mission QB50 where first launch is planned in Q3 2016.

– We want to open space up for researches, companies, third world countries by reducing the cost of sending satellites into orbit by a factor of ten, said Aleix Megias.

The event ended with a note and discussion from the industry itself, leading companies such as SSC, OHB, GKN Aerospace and more gave their take on upcoming trends and initiatives.

– The New Esrange Space Center has the ability can become one of the most important space centers in the world but then we need more students to fill our competence needs, said Ella Karlsson Sjöberg from the Swedish Space Corporation.

Regional SME:s such as Conex Engineering, Umbilical Design, Pre Eye also participated showing their interest on a new and growing industry in northern part of Sweden.

– We participate because see potential business opportunities in the space sector and the current trends are showing growth. We believe that we can meet the demands of the industry and this event was a great way to meet potential new partners, said Jimmy Abrahamsson, CEO of Conex Engineering.