Space in focus at Luleå University of Technology 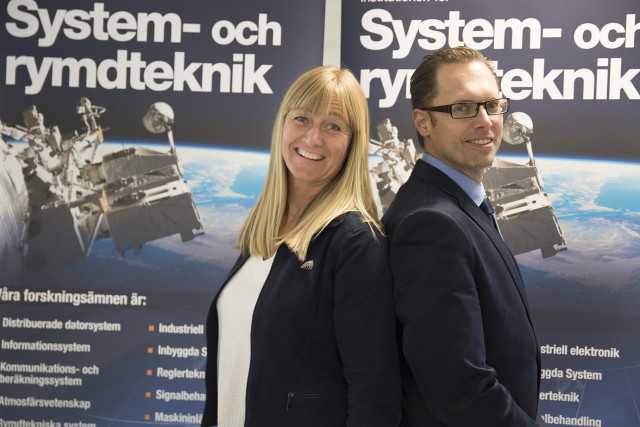 Space is a strategically important research area at Luleå University of Technology and for the industry in the region.

– The university’s space investment is exactly right in time, says Jonas Ekman, professor of Industrial Electronics and head of the Department of Computer Science, Electrical and Space Engineering.

Technology development creates new opportunities to get instruments into space and creating jobs on the ground. Satellites that earlier could weigh up to one and a half tons and take several years to build at an extremely high cost, can now be built in a short period of time, in small size and for a significantly less amount of money. For example, the small satellites can, like their predecessors, be used for communication, measurements and observations. Last year, researchers at Luleå University of Technology built a miniture satellite in the QB50 project, a satellite that was sent into orbit around Earth.

Thanks to technology, space has become more accessible, and more and more actors consider space research as beneficial also to Earth. With help from increasingly sophisticated technology, space could contribute to the solution of the UN’s 17 global objectives, thus bringing about change in terms of poverty, inequality and climate crisis.

– More and more people want to get into space and it can eventually have positive consequences on Earth, Jonas Ekman explains.

– Instruments on board small satellites can be used by new groups of people. By using small satellites, it could for example be possible to follow the development of glacier melting, to keep track of how deserts are spreading and to guard forest fires.

Also Sweden has begun to see the potential of space. Recently, a state report found that it would be favorable to launch miniature satellites from Esrange outside Kiruna, something that the Swedish Space Corporation, SSC, has wanted for years. Kiruna’s geographical location is optimal for both launching satellites and receiving data from them.

– Luleå University of Technology fits well into this context. We have education, research and can create innovations linked to small satellites and large amounts of data, says Jonas Ekman.

– Together with others, such as the Swedish Institute of Space Physics, IRF, we can contribute to the entire chain around a satellite, from the instrument construction to satellite platforms. Our existing research groups within the space area and neighboring research fields, fit in with this development very well; research on instrument development, small satellites and mining on asteroids.

During the coming year, a series of activities will be carried out within the strategic area of ​​space. The need to offer a new space education will be reviewed as well as the possibility of creating a third space-related research subject.

– Research on large volumes of data and the link to energy issues are two examples of relevant areas. As the number of small satellites in space increases, an enormous amount of data is created to be picked up and taken care of; that is a knowledge field that needs more attention, says Jonas Ekman.

Focus will also be placed on research funding and the work on starting a Centre of Excellence in Research and Innovation will continue.

– We also hope to continue our work with some of our key industry players: SSC, Omnisys Instruments, GKN Aerospace and RUAG through the RIT-project. The goal is to continue to be their academic partner and prove that we are truly the industry’s university.