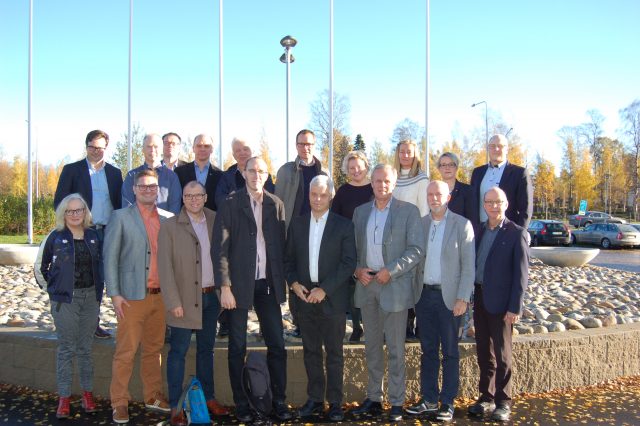 On October 16, representatives from Space Kiruna visited Region Norrbotten and discussed the unique possibilities that  Norrbotten have within space and the space industry cluster found in Norrbotten. An exciting conversation was led by the regional councellor Maria Stenberg (s), Anders Öberg (s) and Glenn Berggård (v).

– We had a lot of interesting discussions about the development opportunities in northern Sweden with the growing space industry, said Johanna Bergström-Roos, project manager for RIT and meeting participants.

Interest in space is increasing and many believe the market will grow in several areas. Space technology is used by the public sector, companies and individuals in areas such as transport and logistics, environmental and climate monitoring, localization of raw materials and communications.

– We know that research and development in the space sector is an important engine that stimulates broad development of new technologies and services in Sweden, Norrbotten and Kiruna, said Maria Stenberg (s), Regional Council of Norrbotten.

The need to send up small satellites is increasing, and the government has just allocated funds to develop a business plan for launches of small satellites from the Esrange Space Center. There are several international initiatives on new projects with high demand for sending up small satellites. One of these is OneWeb, which plans to send 600 satellites to globally provide internet to everyone. In addition, technology development and cost-effectiveness has made it possible for more and more players in the world to develop and build satellites. The trend is for the satellites to become smaller and smaller, with the goal to keep as good performance as possible, even though it will loose some compared with larger ones. This has led to the strategic importance of space operations being increased.

Another interesting project is EISCAT 3D, the next generation radar facility within EISCAT, to be opened in 2021. Nearly 30,000 antennas will be built on three different plants in northern Sweden, Finland and Norway. This will further strengthen the space region and create both jobs and attractiveness.